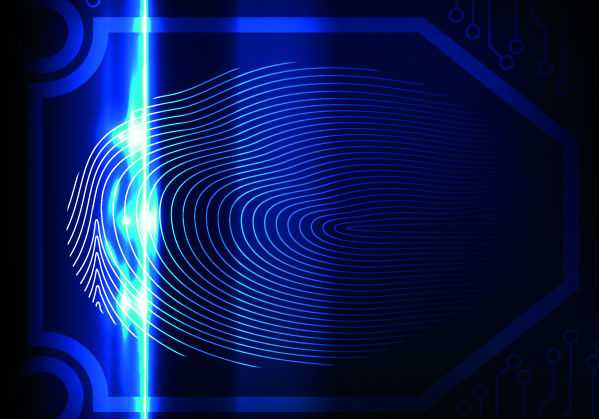 What correctly identifies a fingerprint and its ability to decrypt and access sensitive mobile devices and content.  Latent fingerprinting has been in existence for hundreds of years and similar to signatures, the authentication and usage of both have transformed into a digitally coded approval key.  Electronic submitted forms such as home closings, contracts, and court submitted documents approve the use of a digital signature from the signer and no longer require a “wet” original handwritten signature.  Similarly, modern mobile devices such as iPhones are designed to to protect and encrypt sensitive user information such as banking data, personal collections of photographs, and thousands of personal sent and received communications.  Accessing encrypted and protected mobile devices can be done using a passcode, pin number or even a fingerprint.

Passcodes and PIN numbers are protected by the 5th Amendment however, recent court rulings have not afforded fingerprint protections to the access of encrypted and protected devices.  In this modern era and with the common practice of using your own fingerprint to unlock and view gigabytes of information, the question becomes when does a fingerprint become physical vs digital in its role in the protection of information.  More importantly, once a digital fingerprint is explained and analyzed, how will it apply to individual protections afforded by the 5th Amendment; ‘nor shall be compelled in any criminal case to be a witness against himself.’

Traditional fingerprints are defined by general ridge patterns and impressions including arches, loops and whorls. These physical characteristics were traditionally collected through exemplars and analysis by experts to compare them to criminal databases for fingerprint identification or individualization.

Digital fingerprints or fingerprint biometrics are referred to as Touch ID technology when utilized with mobile device manufacturers such as Apple.  Unlike traditional fingerprints, the creation of this form of authentication is highly sophisticated and utilizes an algorithm of unique digits vs ridges, arches, loops, and whorls.  These biometric keys require a processor, checksum, hash function, and histogram in order to grant access to information systems such as the Apple iPhone.  As such, a device owner must takes more than a dozen steps in order to an store an algorithm created from representing minutiae points of fingerprint.  This stored digital passcode is identical to a manual password or PIN numbers and the rules of protections should always be applied to each one equally.

Setting up the Touch ID requires the user to correctly type in their personal passcode prior to setup and uses more than a dozen sub-epidermal calculations in order to create one Touch ID access and store it within the encrypted iOS device chip.

The Touch ID does not use the fingerprint surface as traditionally presumed but rather it accesses sub-epidermal skin layers and stores the Touch ID as an encrypted algorithm on the secure chip of the Apple A7, A8, A8X, A9, A9X or A10 Fusion processors.  Apple has made the decryption impossible and to date, the Touch ID is 100% undecryptable.

North Korea Cyber Attacks: How concerned should we be?

Finding a straight line to walk between the daily news and…